Cycling in Woerden, Utrecht, The Netherlands

Some options to have a drink and/or eat along the way:

Starting point Fortress city of Woerden
In the eighteenth century, Woerden became a fortified town of the Old Dutch Waterline (OHWL). An almost complete outer moat or Singel and a small part of the inner moat remain of the double walls. A walk around the remains of the associated ramparts takes you past quiet areas with water features, parks and cemeteries. A heavy-duty Arsenaal (military warehouse) and a large barracks, in classicist style, are among the most striking buildings in the historic center. On the edge of this, the castle of Woerden has been preserved. The late medieval building was also part of the city's ramparts. Even older are the Roman traces that can be found in the city museum and parking garage Castellum.

Headquarters of Prince William III
In 1672, Prince William III established his headquarters in Bodegraven on the Oude Rijn, approximately in the middle of the OHWL - from Gorinchem to Muiden. The passage of the Oude Rijn was defended with redoubts at Nieuwerbrug and Wierickerschans. That was sufficient until a French army unit at the end of the year - in the absence of Prince William III - managed to get behind these defenses across frozen inundation areas in Zegveld. Up to Gouwsluis, where the Gouwe enters the Oude Rijn, defenses were disabled and buildings and water mills were set on fire. In addition, residents of the villages of Zwammerdam and Bodegraven fell prey to the destructive, robbery and murderous desire of the French soldiers.

(1)
Fort Wierickerschans
From Woerden, the old towpath leads along the Oude Rijn - on the south side - to Fort Wierickerschans in Bodegraven. This fort was built within a year after the disaster with the French soldiers. So it was the result of great shock and indignation. A breakthrough in the Old Rhine area was not allowed to happen again.
Fort Wierickerschans is surrounded by heavy, high ramparts and has four protruding corners: the so-called bastions. A wide moat has been constructed around the fort in connection with the Oude Rijn. The fortress measures more than a hundred by a hundred meters and contains several military buildings. From the middle of the eighteenth century, the fort was used as a gunpowder depot for a long time. Heavy buildings in the courtyard indicate this. These monumental buildings are currently being restored and renovated. Staatsbosbeheer has set up a visitor center at the fort:'Het Groene Hart Centrum\\\'.

(2)
Prinsendijk
The French enemy tried the inundation area of the Wiericken, between Oude Rijn and
Hollandsche IJssel, disrupted with a lot of river water in 1672-1673. Prince Willem III was therefore forced to order a dike: the western quay along the Single Wiericke had to be made into a heavy dike. For this work, each polder had to provide a contingent of burly men with tools. That happened, and the Prinsendijk is still there. In peacetime, the Prinsendijk, on the border of Holland and Utrecht, was a hurdle that smugglers had to overcome. The smuggling trail towards Hekendorp is a reminder of that. Now this area is popular with walkers and cyclists.

(3)
Goejanverwellesluis
In the time of the OHWL, Hekendorp was called Goejan- or Goverwelle and the lock in the dike of the Hollandsche IJssel was called the Goejanverwellesluis (see also the Princess Route). The water from the Hollandsche IJssel was let in through this lock to flood the land between the Wiericken: an inundation area with a width of approximately two kilometers. Nowhere was the OHWL so narrow between Gorinchem and Muiden. That is why main posts of the prince's army were established in 1672-1673, both along the Oude Rijn and along the Hollandsche IJssel. With the exception of Fort Wierickerschans, nothing of this has been preserved.
The route continues east through the Hekendorpse Buurt to Oudewater.

(4)
Fortified city of Oudewater
The small old town has an unfortunate fortress past. The"murder of Oudewater\\\" took place during the Eighty Years' War (1568-1648). In 1672-1673 Oudewater lay unprotected for some time in front of the waterline, ie for the line Goejanverwellesluis-Nieuwerbrug. It was not until the eighteenth century that the waterline was moved to the east and Oudewater was considerably strengthened. Traces of high bastions and a wide moat are best visible on the southeast side. From that old fortified southeast corner, the route continues over the Waardsedijk along the Hollandsche IJssel, through the Snelrewaard and in the direction of Montfoort.

(5)
Former Line of Pleit
About halfway between Oudewater and Montfoort, Hoeve de Schans is reminiscent of the Linie van de Pleit that lay across the Hollandsche IJssel around 1800. Behind the farm, a deviating ditch pattern still reveals the location of a so-called half bastion. The modern pumping station'De Pleyt\\\' is now located on the south side of the Hollandsche IJssel and café-restaurant De Schans refers to the old line from the time of the OHWL.
In Montfoort you can find remnants of city walls and a gate, a moat and a partly restored and renovated castle. In the eighteenth century, the Utrecht town was almost adjacent to the OHWL. For the next track of the water line, the cycle path along the N 204 must be chosen in the direction of the village of Linschoten.

(6)
Former Line of Linschoten
Just before the village of Linschoten, the cycle path crosses the Linie van Linschoten. The defense work from the end of the eighteenth century, located at right angles to the current road, is still recognizable by traces of soil and bushes, the last trace of a camouflage forest. On the other side of the N 204, a small farm bears the name'De schans\\\'. Behind it, the contours of the old land line extend further, as indicated on a panel along the cycle path.
The cycle route continues through the church village of Linschoten and from there over the Weipad in the polder to the Cattenbroekerdijk. In a northerly direction, this dike ends on the east side of Woerden.

(7)
Former forts Oranje and Kruipin
On the Utrechtsestraatweg on the south side of the Oude Rijn, the route returns to the historic center of Woerden. At the height of the Meander new housing estate, the street Fort Oranje and the residential areas of Bastion Willem and Bastion Maurits are first passed. Those names, together with newly created moat and bastion shapes, are reminiscent of the former Fort Orange. The small fort De Kruipin belonged to the north side of the Oude Rijn. At this point the OHWL crossed the river in the eighteenth century.
In 1672, Prince Willem III and his soldiers had already clashed with the French enemy at that location. The'Battle of the Kruipin\\\' cost many lives and was accompanied by a major fire in the disputed Woerden. 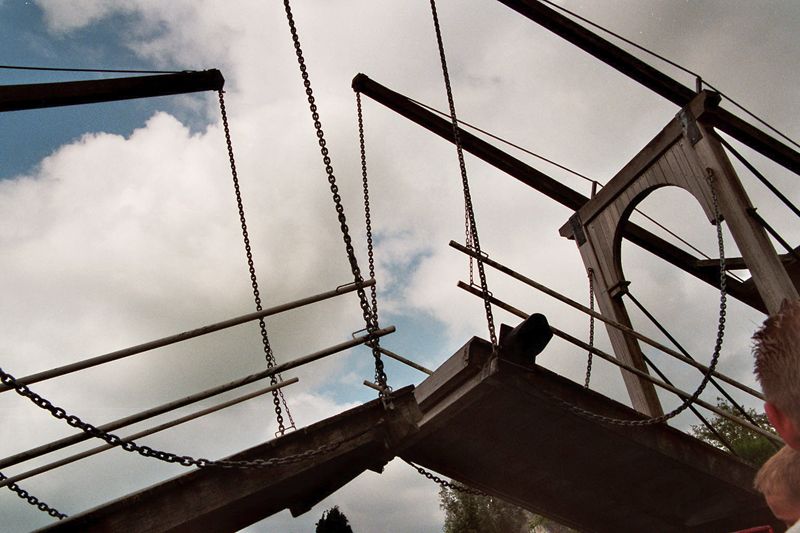 Feel at home at Broeck on Broeckerstraat in Oudewater, the most beautiful and oldest town in the Gre...