History buffs will love this route that is offered to you by the South Holland Tourist Board. You wind along the Linge and along with the Merwede Canal. These are two of the most important historic waterways in Dutch history. The route takes you along part of the Nieuwe Hollandse Waterlinie; an old defense line that used to be flooded to protect the Netherlands against enemy troops. The tour leads past old mills, historic fortresses and beautiful nature reserves. You park your car in the parking lot at the harbor in Gorinchem. In this city you will soon see the mill Never Perfect on the route. It is a round scaffolding mill that ground corn and has only been rebuilt twice. The mill only got its name in 1889, after it burned out. The structure was restored with parts from an oil mill called 'Nooit Volmaak' and this mill took over the name. The mill still grinds grain on a voluntary basis and was completely restored at the beginning of 2012. When you have cycled straight through Gorinchem, the route splits at Arkel to lead you via the small Kedichem towards Asperen.

Fort Asperen is situated there in a historically strategic position. The fort belongs to the new Dutch Waterline and could see enemy ships from afar. The tower fortress used to be surrounded by a moat and could therefore only be reached via a wooden drawbridge. The fortress has the status of a national monument and was repurposed as an 'art fortress'. Cultural events and exhibitions have been organized in the complex since 1981.

Through the interior you cycle to Schoonrewoerd, then you cycle past Leerdam. Windmill Ter Leede is located on the edge of that city. Until 1940, the seesaw mill, together with another mill, drained the Bruinsdel and Hoog-Leerbroek polders. Ter Leede was almost demolished when the windlass broke in 1940, but a glass factory saved the mill by buying it. 42 years later the mill was transferred to the municipality of Leerdam, which wanted to restore it. It was not until the restoration was completed, in 1985, that the mill was given its current name.

When you arrive at the village of Arkel, you will see the Jan van Arkel mill. The octagonal scaffolding mill was built in 1852 and has been standing still since 2010. The maintenance of the breedings is urgently needed, but also the stone substructure, among other things, is in urgent need of repair. This cycling route is offered to you by the TOP Route Networks Foundation (formerly South Holland Tourism Bureau). More information about TOP routes can be found at: www.toproutenetwerk.nl 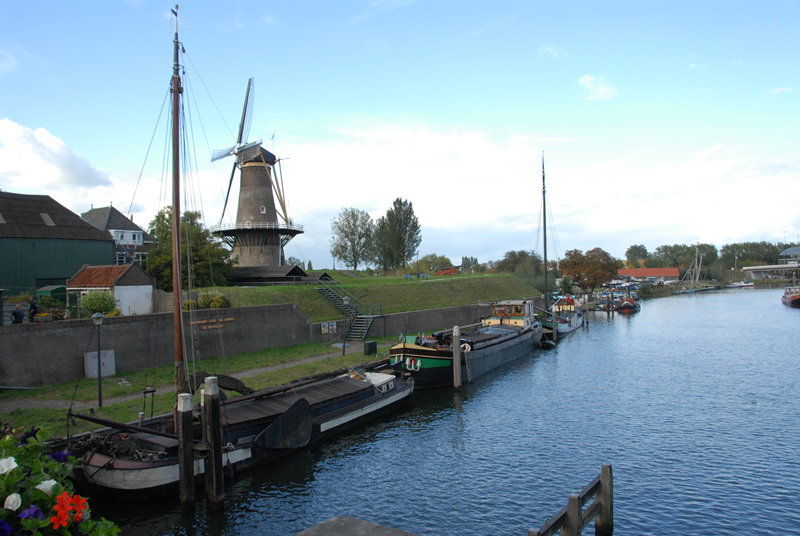 The VVV cycling routes on www.route.nl lead you to the most beautiful places in the Netherlands and Belgium <<. The VVV knows better than anyone where the best, most interesting sights are. Whatever you want to do, the VVV knows where to go!

After a heavy storm in 1717 the mill was destroyed, the owner decided to build a stone flour mill. T...

It was not until 1985 that the mill was given the name Ter Leede, named after the water board that w...

Curious about mysterious water cellars, half-hidden bunkers and overgrown depots? Get on your bike, ...