Castle and watermill route in the Netherlands and Belgium

This cross-border bike tour takes you to the Schweibergerbos, among other places. It is an extensive forest area near the municipality of Gulpen in Limburg. The sea of trees grows on the western edge of the valley of the Geul and on the eastern edge of the Plateau of Crapoel. So it is partly a sloping forest. The forest is surrounded by other forests and there is therefore a large ecological transition zone here. Hidden by the mysterious trees, in the Schweibergerbos you will find a war memorial erected in memory of fallen British air force soldiers from a bomber of the Royal Air Force, and the gravel farm Bissen. From Auberge De Smockelaer, where you can park your car for free, you cycle to the Commanderie, which you will find after 8.5 kilometers. It is a beautiful castle in the Mosan Renaissance style and a former commandery of the Teutonic Order. The property was donated by Dani? L van Voeren in 1242. The castle was the commandery of Alden Bielden, where the commander stayed. The complex consists of a main building, a farm, stables and a gatehouse. The oldest part of the fortress is the L-shaped wing, on which a tower adorns. A number of ponds were added to the original moats around the castle in 1885. Trout, sturgeon and eel were and still are cultivated here. The next stop will be at the Wingberger Mill. This water mill from 1844 has long served as a flour mill with a turbine, but has been out of operation for quite some time in 2013. There are no plans to make the mill operational again. There is a restaurant located in the mill, which ensures that the mill does not fall into disrepair despite being at a standstill. If you want to view the inside of the mill, you can make an appointment. The two beautiful water mills are another highlight of the tour. In Mechelen you will find the Lower Mill and the Upper Mill. The original Lower Mill was built in 1215 and was then called the Commandeurs Mill. Later, after a restoration, the mill was renamed the 'Lower Mill'. This mill was originally used as a flour mill, but later it was also used to generate electricity. The Bovenstemolen, which you can see 700 meters upstream, is a mid-stroke watermill. A ban mill was built here in the thirteenth century, but in 1828 the mill was rebuilt as a paper mill. The former paper mill was turned into an artificial wool mill in 1856, but this company went bankrupt in 1882. The mill was completely restored in 1978 with a major restoration and got its old grinding function back. In 2013, organic wheat is ground with it and the mill is set up in such a way that it can also process other grain products. Finally you come to the Schoutenhof estate. So high in the rolling landscape you have a beautiful view of the hills and forests that connect directly to the park of the estate. The estate is a nice place full of sports activities that you can participate in. Golf, horse riding and fishing are among the possibilities. Back at the Auberge de Smockelaer, the café-restaurant looks very inviting. A delicious dinner and a nice drink on the terrace naturally feel like a treat after the bike ride, but how about a cycling weekend away? Book one of the attractive (group) accommodations or a holiday home for that real holiday feeling. The next day you can get on your bike rested and energetic to also make route 164685. 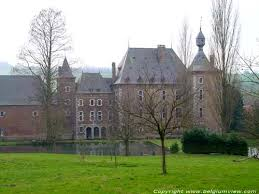 At Auberge de Smockelaer you will find attractive group accommodations, holiday homes and a B&B in a...

The Commandery of Sint-Pieters-Voeren is a castle in Mosan Renaissance style that was built in the 1...

The Bovenste Molen has been in the small hamlet of H? Fke for 750 years and has been used over the y...

Landgoed Schoutenhof is a nice place full of sports activities that you can participate in. You can ...