From Epen along some watermills

Cycling in Gulpen-Wittem, Limburg, The Netherlands

The Vijlenerbos is an approximately 650 hectare forest area that was already inhabited in prehistoric times. The vast hillside forests between Vijlen and Vaals are characterized by very large differences in height of up to about 100 metres. The highest point is the famous three-country point. Cycle through the impressive karst landscape in which limestone dissolved in water and where you will find gigantic craters filled with flint eluvium and tertiary sand. These funnel-shaped landscape elements are called organ pipes. These organ pipes and so-called shot-shaped"bowls\\\" with a diameter of several tens of meters, called'dolines\\\', were created by dissolving limestone in water, a process called karst. In addition, beautiful boulders of sandstone cemented together with silicic acid can be found in the beautiful Vijlenerbosch in Limburg. Close to Hotel Eperland, which forms the base for a wonderful cycling weekend (route 140570 also starts and ends here), you will find the Schoutenhof estate. On and around the estate you will see cute half-timbered houses and atmospheric farmsteads. At the Schoutenhof estate you can undertake all kinds of sporting activities, such as fishing, golfing or horseback riding. The beautiful view over the Geul valley provides a wonderfully relaxed and tidy feeling. Then the first water mill presents itself. A ban mill was already built on this site in the thirteenth century, but in 1828 that mill was rebuilt as a paper mill. In 1856 an artificial wool mill was made from the former paper mill, but this company went bankrupt in 1882. The medium-stroke water mill, called the Bovenste Molen, was completely restored in 1978 with a major restoration and got its old grinding function back. In 2013, organic wheat is milled with it and the mill is equipped in such a way that it can also process other grain products. The Onderste Molen in Mechelen is seven hundred meters downstream. This beautiful water mill was used as a flour mill, but it also generated electricity. The original mill was built in 1215 and was then called the commander's mill. Later, after a restoration, the mill was renamed the'Lower Mill\\\'. The mill was made fully operational in 2005 and now runs on a voluntary basis. You continue the bike ride to Vaals, where you can view the Frankenmolen. This overshot water mill from 1736 was used as a spinning head for years, until the accompanying factory burned down three times in fifteen years. In 1905, the blanket factory was closed and the mill was converted into a flour mill, a function it has fulfilled for many years and still does today. Then it's time for a visit to the estate on which an imposing building called Vaelsbroek and the Vaalsbroekermolen are located. The current"Castle\\\" Vaelsbroek, a beautiful U-shaped mansion, was built in 1761 by the cloth manufacturer Johann Arnold von Clermont from Aachen, who moved his factories to Vaals. A modern castle in classicist style was built on the estate and a beautiful park was created around the house, on which a mausoleum was built for the owner's relatives. The Vaalsbroekermolen is a beautiful water mill that was built in 1776 in Vaals. The mill was used as a spinning and flour mill until about 1960, after which the mill fell into serious disrepair. Until 1988, the mill was hardly maintained, but when a hotel was built next to it, the mill was completely restored. The mill is ready to grind again and looks beautiful, but it never got back to its old function. There is a restaurant in the building, where you can enjoy a bite to eat. The Vaalsbroekermolen is part of the castle Vaelsbroek. Then you cross the border to cycle a short distance across Belgian territory. This is how you go back to Hotel Eperland. In the hotel restaurant you can end the day with a delicious three-course dinner and a drink. If you really want to enjoy a relaxing weekend in Limburg, book an overnight stay so that you can also explore route 140570 rested the next day.
City park Cultural routes Border route Mill routes Monument routes 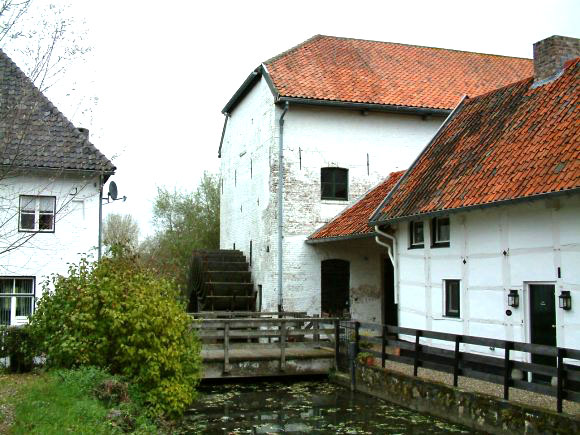 Hotel Eperland is located in the picturesque village of Epen, in the heart of the South Limburg hill...

Landgoed Schoutenhof is a nice place full of sports activities that you can participate in. You can ...

The Bovenste Molen has been in the small hamlet of H? Fke for 750 years and has been used over the y...

This water mill dates from 1736. The entire mill complex consists of a large brick building. There h...

Near Vaals you will find Vaelsbroek Castle, a white mansion from 1761. Around the house you will fin...

The Vaalserbroekermolen is a watermill that was built in Vaals in 1776. The mill was used as a spinn...