There is no shortage of water and water sports on and around the Loosdrechtse Plassen! The ponds are the heart of a protection zone for flora and fauna, including many bird species. The lakes were created by painting the area and are separated from each other by dikes and islands. Historic country houses and picturesque landscapes surround the waters and add to the authenticity of the area. You leave from the parking lot in Loenen aan de Vecht, where you can park your car for free. When you leave the built-up area, you cycle into a wetland area. In the middle of the polder is a seesaw mill from 1832: the Trouwe Waghter. This mill had to replace two other mills, which drained the water board in other places. Until 1948, the Trouwe Waghter drained the polder by means of a paddle wheel, but when it came into private ownership in 1950, the interior was broken out. In 1960, the property rights were transferred to Natuurmonumenten, who had the mill restored and made it operational again. Then you will come to Fort Tienhoven, which was built in the period between 1848 and 1850 as part of the New Dutch Waterline. The fort was closed off the Tienhovense Vaart and guarded the inundation quay, a dam lock and the Kraaiennesters lock. The design is almost the same as that of Fort Kijkuit and Fort Spion. The fort is not accessible, but it offers a nice view. Then you pass beautiful country houses, many of which were built by wealthy merchants in the Golden Age. Landhuis and Weerestein are two impressive inhabited country houses. They both date from the seventeenth century and many references can still be found in the architecture, but the gigantic houses Vechtzigt and Groene Vecht are equally impressive. The estates Queekhoven and Vegt en Hoff located in Breukelen are also beautiful to see. The current Vegt en Hoff was built in 1873, on the spot where there used to be a house called'Grashuisse\\\'. Not much is known about the origins of Queekhoven, because a raging fire completely destroyed the archives and the original house. Three other country estates that you can see from your bike during your trip are Oud Oever, Bijdorp and Vegtlust. Located along the east bank of the river Vecht, Oud Oever has a main building, a historic garden and park layout, a garden dome, gardener's house, horse stable, coach house and several entrance gates. Oud Oever was built around 1700 by Pieter van Beeck. He called the house Beek en Hoven at the time. This name was changed 10 years later by his heir to Oud Oever. In the nineteenth century, Johannes Willem van Reenen bought four country estates next to each other on the Vegt. Bijdorp was one of them, another was Vegtlust, which was built in the eighteenth century. The other two were demolished and a beautiful park was created on the vacant piece of land. In 1981, Vegtlust was renovated and six apartments were built. But one of the best preserved smaller estates in this area is Bijdorp, which was built around 1710. In total, this territory covers 1.2 hectares of land. Various parts of this country estate are protected because they are national monuments, such as the main building from 1700 and the historic garden and park layout.
Forest Cultural routes Nature Route Fort Route E-bike routes Monument routes 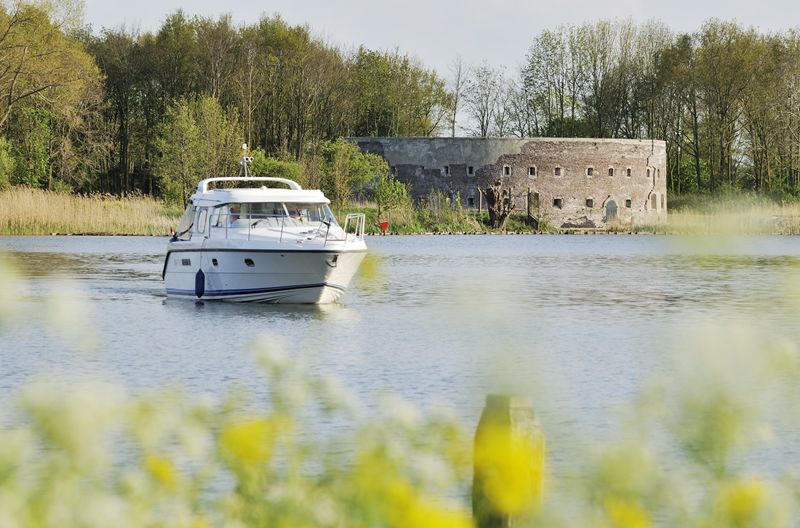 This mill is a hollow post mill east of the village of Tienhoven in the Dutch province of Utrecht. T...

Vegt en Hoff is a country house from 1873 that is located on the edge of the river Vecht. A country ...

Queekhoven is a country estate with a castle that was probably built in the 17th century. Around the...

Weerestein is a country estate along the river Vecht near the village of Nieuwersluis. The current m...