Groningen at its best

The city of Groningen is a shiny pearl in the far north of the Netherlands. The beautiful historic city center is easy to walk on, there are many cozy bars and the city has a lot of entertainment to offer in the cultural field. With the cycling route you can explore a small part of the city, if you want to see more, you can do cycling route number 309498'Enjoy the authentic Groningen\\\'. Both routes start at the Martini Hotel Groningen. This atmospheric hotel with a view of the famous Martini Tower has been welcoming travelers with open arms since 1871.

In the Grand Café with a 1930s decor you can start the day with a nice cup of coffee or tea with something delicious on the side. If you're on your bike, you'll immediately have two major attractions in Groningen at the start of the route! Nearly opposite each other are Groningen Station, one of the most beautiful station buildings in the Netherlands, and the Groninger Museum. You can visit the station in a fairly short time, just walk in and take a look at the ornamental ceiling of papier collé (a special form of paper stucco with paper pressed in moulds). The Groninger Museum is an architecturally special building. You should allow more time to visit the extensive art collection inside. Maybe an idea for after the bike ride.

The cycle route continues via the south side of the city, past the oldest city park in Groningen, the Sterrebos. Created in 1765, this was actually a star forest, a forest with eight trails leading in different directions from a central point. Via the large residential areas of Groningen you cycle chic Haren in what is called the'Wassenaar of the North\\\'. Haren's buildings are characterized by the large number of villas and spacious semi-detached houses, the most characteristic of which were built between 1880 and 1940. This was partly under the influence of Mayor Boerema. He had ambitions to grow the village into a location for the better-off commuters from the city of Groningen.

At the village of Glimmen you cycle past the vineyard Domein de Tarquinius, one of the northernmost vineyards in the Netherlands. The Zuidlaardermeer is located on the border of the provinces of Groningen and Drenthe. You pass the northern shore of this beautiful calm water, where there are recreational beaches, but which mainly has a special nature reserve on this side, the Kropswolder Buitenpolder. This again connects to the Foxholstermeer, also a popular area with bird watchers. The waters here were created by peat excavations in earlier centuries.

Windmill De Hoop, an old buckwheat mill, is located along the water. You cycle back to Groningen via the so-called MEER-cities. A major urban expansion of Groningen is planned around Engelbert and Meerstad. It is the intention, however, that the old villages retain their identity. The Hunzehaven and the Oosterhaven, along which you cycle into the city, are located on the Eemskanaal. This is an important shipping route for the city. As a Hanseatic city, Groningen was part of the North German trade network. Various canals have been dug for this to connect the city with other important waterways. Groningen has always remained an important trading city and today is a center for the food industry: sugar, tobacco and coffee. 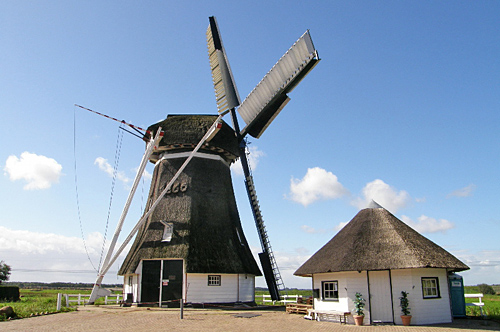 Martini Hotel Groningen is located right in the heart of Groningen. Whether you get on your bike or ...

Cafe Theater G & A Boelens can be found right in the center of Eelde. This real family business is a...