Cycling along the water in Belgium

The Scheldt rises in the north of France and eventually flows into the North Sea via the Western Scheldt. Via this route you will explore the Scheldt valley around Oudenaarde in East Flanders, a city that is surrounded by the green ridges of the Flemish Ardennes. The Scheldt crosses this city from southwest to northeast. Originally the Scheldt winding its way through the Flemish Ardennes. Especially in the twentieth century, many meanders were cut off to straighten the Scheldt. You mainly cycle in the Scheldt valley, for a large part you follow the towpath along the Scheldt. Several cut off Scheldt meanders have been preserved in the landscape. For example, from the dike along the Scheldt you have a beautiful view of the Heurnemeersen, just north of Oudenaarde. The old river meanders, forests, grasslands and swamp vegetation of this reserve are home to a rich flora and fauna. The red-tailed bat has its hunting ground there. He finds a real feast there because of the many insects that occur there. 55 species of birds also breed there and 14 species of dragonflies and 22 species of butterflies have been observed. South of Oudenaarde you cycle along the Langemeersen nature reserve. Here you will see meadows with wild flowers and many birds, such as the grasshopper warbler and garganey. Oudenaarde is also well worth a visit. From the sixteenth to the eighteenth century, the city was renowned for the production of beautiful tapestries. Nowadays Oudenaarde is nicknamed'The pearl of the Flemish Ardennes\\\'. In the city you can admire the town hall, a textbook example of Brabant late Gothic, or settle down for one of the famous brown beers.
Museum Cultural routes 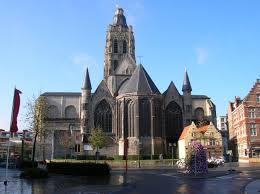